feed the soil, not the plant

Still committed to the no-dig principle, I increased my order of composted manure to 30 sacks and managed myself to trundle them from the gate where they were delivered all the way down to plot number 10. Whew.

I’ve now spread most of it on the beds to a depth of about 2″, which is pretty good especially as my own home-made compost had provided a good layer below that on at least 5 beds in the autumn.

The final job before I can mulch the fruit cage has been to cut down the autumn fruiting yellow raspberries, thin the summer ones and weed the thick matting of weeds and wild strawberry plants that have spread relentlessly over the past year. Four pairs of soggy gloves and gooseberry-spike lacertated wrists and arms later, I’ve done most of it: 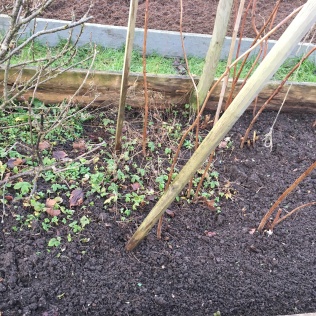 It’s been raining ever since, but will get back and finish this as soon as I can. Meantime, the quince tree has also had a major pruning as it was becoming way too big. Last year’s crop was tiny – in contrast to the bounty of 2015. I hope this, plus mulching, will help to restore a better balance. You can see below it’s jostling with my neighbour John’s plum tree on the right….. Oh dear, I’m running out of allotment space! 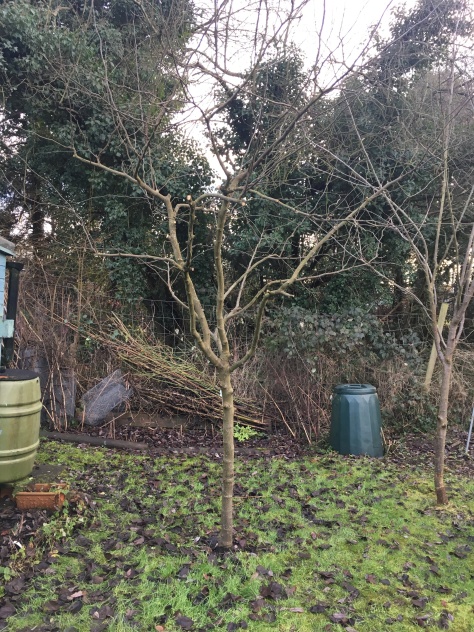 Leadership & executive coach, based near Farnham, Surrey, UK. Love my garden and organic allotment / potager.
View all posts by Ruth Paris →
This entry was posted in Allotment, no dig, no dig method and tagged compost, mulch, no-dig allotment. Bookmark the permalink.

2 Responses to feed the soil, not the plant